HOW THE MILL WORKS: STONE GRINDING 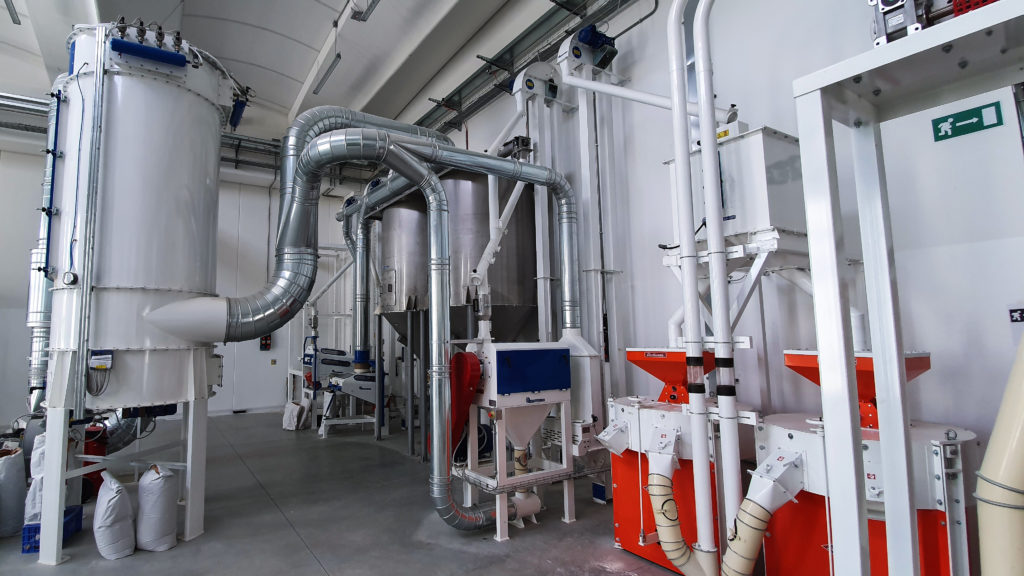 The history of grinding

From the earliest times the ancient farmers crushed the grains by means of mortars and then between two stones. Until, in the year 1000 b.C. approximately, it succeeded in giving the millstones a rational shape.

The use of hydraulic force, wind and steam propulsion represented the revolution of this art. At the end of the 18th century the millstones were powered by “batteries” by hydraulic turbines or steam engines. Subsequently also the auxiliary machines were “motorized”, so the dampeners, the elevators and the plansichter appeared.

The refinement of the plansichter revealed the limit of the stone grinding. That is to treat all the grain fractions in the same way, regardless of the different resistance to grinding. So a few years later, roll mills began to take hold.

The functioning of the stone grinding

Stone grinding technology is based on the knowledge from the late 18th century, shortly before the evolution of cylindrical grinding.

A millstone consists of two horizontal wheels in relative motion one on the other. One of the two wheels is fixed, the other is mobile.

The millstone exerts a strong pressure and rubbing action in a single solution. Then the miller adjusts the fineness of the product by approaching or distancing the surface of the two wheels. The flour obtained from stone milling contains the 100% of the grain of wheat. It exceeds the maximum ash limit. Therefore, a selection step is necessary, which takes place in a plansichter. The results are the whole flours and type “2” and type “1” flours.

To learn more about the plants installed by Molitecnica Sud, click here.

This website uses cookies to improve your experience while you navigate through the website. Out of these, the cookies that are categorized as necessary are stored on your browser as they are essential for the working of basic functionalities of the website. We also use third-party cookies that help us analyze and understand how you use this website. These cookies will be stored in your browser only with your consent. You also have the option to opt-out of these cookies. But opting out of some of these cookies may affect your browsing experience.
Necessary Always Enabled
Necessary cookies are absolutely essential for the website to function properly. This category only includes cookies that ensures basic functionalities and security features of the website. These cookies do not store any personal information.
Non-necessary
Any cookies that may not be particularly necessary for the website to function and is used specifically to collect user personal data via analytics, ads, other embedded contents are termed as non-necessary cookies. It is mandatory to procure user consent prior to running these cookies on your website.
SAVE & ACCEPT